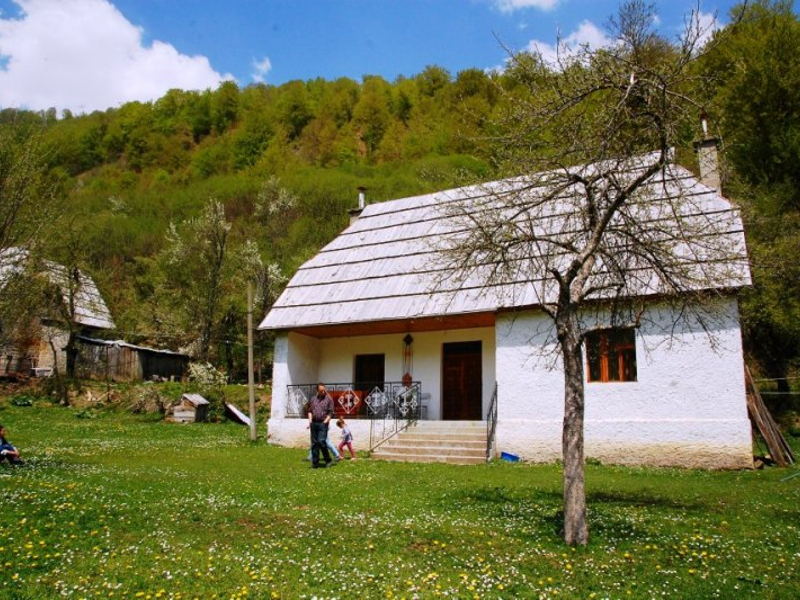 Cooperation, Institutions and UN Agencies. A rural project in Albania.

The Frima and Kelmend Consortium (Spirit of Kelmend), north of Albania, is now a small hub that has brought together twelve productive realities. The local community, part of The Rural Integration Development Project created by Ong Italiana VIS www.volint.it, with the Italian Ministry of Foreign Affairs and the CEI, constructed 8 guesthouses. These guesthouses were rebuilt according to quality standards of accommodation and catering, offering traditional and comfortable settings. The community produces and distributes cheese, herbs, honey, blueberries and jams. It has created a network of guided trekking trails and a social network for guesthouses and the visitors. The most important step was the creation of an Info Point, managed by 4 women, after having taken part in a training course created by VIS. The Project has received awards by UN Women, which has activated diverse initiatives with Rural Women in Albania.

Why we like it
These new ideas were extremely well utilized and have resonated so well within the community that already 6 other communes have requested for similar projects. “ We have worked on both the financial and the educational points of view, on the aspect of credit and solutions to small problems “, explains Pier Paolo Ambrosi, head of Vis Albania. “ We have involved the local community, going from village to village with a manual that explains how to participate in this Community Initiative. We asked a bank to offer favourable microcredit rates for the local businesses, making it easier for people who were formerly excluded and for individual investments. Associations, Ministries, Communes were all part of the decision making, all the players present in the territory who evaluated the proposals and then provided funds. The funds were accompanied by contracts whereby the applicants provided 80% and the community provided the rest. At the same time, we worked on training, marketing, evaluating the region’s potentiality and on empowerment.”

The project’s history
After 10 years in Tirana during which many goals had been reached, the volunteers of Vis realized that while Albania continued to evolve, there were isolated areas in the north of countryside. “ The volunteers in this field then individualized an area north of Scutari, on the border with Montenegro”, explains Domenica Bombara, a cooperator from Vis. “ A most fascinating area but cut off from the rest of Albania, that existed economically with self reliance. We used an approach of community participation, not written in ink, but born from discussions with the communities’ representatives and with private companies. That is how the Committee for Local Development was created, made up of representatives from families, schools, producers and they were asked what was needed. Firstly, a canal was constructed, then bridges, fencing around a school. On a more private level, they started to rebuild houses that could become guesthouses. After only one year, they realized that they could also get involved in tourism. At that point, there was constant monitoring, every 2 or 3 months, on the work being done on the houses, ensuring that they were being refurbished according to international standards.

It was very important to explain how to organize the meals, how to share and use the ingredients, how to create good quality natural food products at low prices. In November 2012, a document on standard catering quality came out, which the guesthouses in Kelmend had to acquire and conform to in order to be part of the Kelmend Consortium network. Everyone would work with guidelines and a trademark to produce and distribute cheese, herbs, honey, blueberries and jam.”
Other cooperatives in neighbouring areas also joined in the Consortium with their trademarks and specialties. The Consortium joined up with UNDP, which wants to open a cross-border Park of Peace between Montenegro, Albania, Kosovo. The important step was to create an Info Point, with the collaboration of everyone, and to go from house to house, to the schools and churches, to search for young men and women, to take part in numerous training courses such as to become a tour guide (with an association from Tirana), courses in English, cooking and hygiene. And it is here that the youth of Kelmend come into the picture.

From all these meetings, it became evident that women young and old were segregated to the house, while the young men left the villages to look for economic opportunities.
Drita was one of these girls. Like the others, she lived at home and left only to collect sage in the countryside, herd the cows and was very shy. The community considered her a nobody as she had not studied. Her ‘blossoming’ started when she decided to sign up for a training course and studied Italian and English by herself. She now manages the Info Point, a Consortium with 12 production lines (jam, beer, herbs, guided tours, guesthouses). She was voted President of the Consortium. And she was awarded the title of ‘UN Women Award Successful women in rural areas’