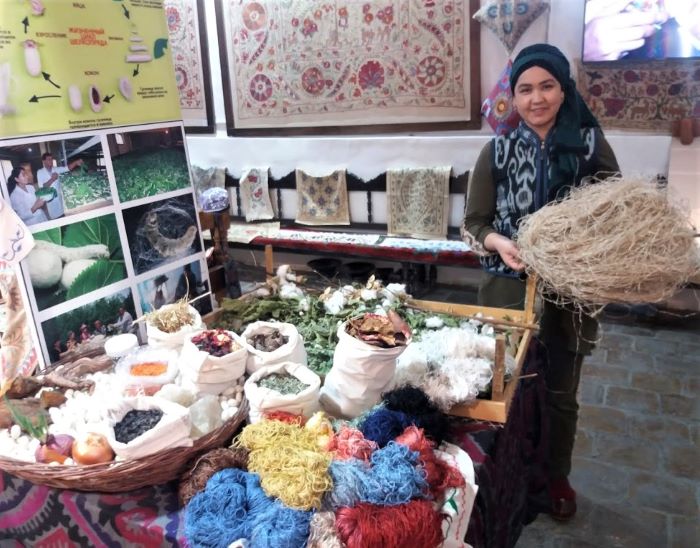 A Guest House on the Silk Road

Who: Community Based Tourism Guest Houses

A legendary journey along with the arts with women protagonists

In the Country that was the reign of Tamerlano, ruthless but enlightened protector of the arts, where silk was produced since the first century BC in the splendid valley of Fergana, today Iranians, Kyrgyzs, Russians coexist, people live on agriculture and tourism, Turkish, Japanese and western manufactories and factories have arisen, the valley of Fergana is rich but also tormented by terrorism, everybody can play traditional musical instruments, the same president has been elected since 1991, 5 state newspapers coexist, Greens and Liberals sit in Parliament and the women who are 10% of deputies have convinced the government to open many private nurseries in which the State pays teachers, to let the moms work.

But above all, the treasures of Islamic art and architecture, which are identified with the Silk Road, resist in all their splendour. With the novelty that on the Silk Road you can also go in nature: on the old caravans roads between the Pamir and Samarkand, Indian, Chinese and Arab skiers come to ski; from Samarkand, you go to the Nuratu mountains to do birdwatching or trekking and sleep in the desert with an evening in the yurts.
And there is no village without a Guest House. Those of the European project "Community Based Tourism" consists of a network of 160 Guest Houses for rural communities and small towns, with a consortium in the cities that reaches 500 houses, has trained 700 owners, of which 80% women.

For sure, are enthusiastic about the idea of the owners of the cottages in the village of Kumyshkang, a few kilometres north of Taskent, on the road to Karakalpak, in a park surrounded by earthy mountains, once-thriving Soviet mines obviously abandoned. Among the pines, there are a school, gym, library and rows of colourful houses of the miners, which have become twenty b+b animated by intrepid housewives turned into businesswomen. At number 34 Riosava serves tea and tells how it involves tourists with the whole family: in the morning they feed the animals, a daughter teaches embroidery, a son accompanies the mountain on horseback, another makes tandoori bread, grandmothers and relatives are involved throughout the season, so much so that in the end with the 10 euros of a tourist live 9 people (telephone 009989 94058800). Tonia, at number 30, even has a museum room with costumes and a workshop where they make beads necklaces, sell embroidery, even the men collaborate and in the courtyard between the chickens are even building a mini pool. The interesting fact is that the people of the village are intrigued by the few tourists who come here and go out to talk willingly. This is how the knowledge of Aksakal is made, a very important figure in the millenary tradition, because it is he, with his long beard and his cloak, the "wise man" who watches, advises and settles all the questions of the village. We learn from him two facts: that this is a hidden matriarchal society (his unverified theory) in which women work and regulate the organization of the family, and that with tourism everyone is more dedicated to cleanliness and services so in the future I want to invite to weddings, and music festivals.

Completely different from this semi-rural reality is the welcome in the cities, notoriously run in by millennia of visits from abroad. And here women are really well organized. Entering Bukara you meet the owner of the impeccable boutique hotel Kavsar, in front of the Madrassa Nockr Divangedi, explaining that this a woman of the family business. But before arriving there you are already lost between the minarets and the blue domes dream, the caravanserai, the streets of the old town and the ghetto. Here many women work in guesthouses. Torsheva Markabay (Guest House Murod Yusupof murodyusufiy@bk.ru) has made school: she welcomes in a large room, with her husband musician and children to the traditional instruments for a concert, they make cooking classes, music, sew clothes. At the nearby guesthouse Al Bukari three children play in the yard, while Mahkbuba Kodirova shows the exhibition of carpets and offers the plov. Beyond the 10th century Zoroastrian temple, where the decorated walls of the ancient covered markets begin, three generations of women trade in the carpet shop Classic Bukara Carpet and Khaujakulova explains the techniques and characteristics of the famous "suzani": silk on silk, the tree of life, months of work, with much intelligence and knowledge passed from a generation to the Atlra. A committee of 200 women who coordinates with the shop is paid every month and live in the village of Shofirkon, where she can accompany. Leaving the market area towards the minaret, we meet another shop, Uzbek Suzani, in which there are also the designer and embroiderer, with pomegranates, aubergines, turnips, mustard, to dye the soft and shiny silk skeins. Instead, at Ikat Adras Shop, the three sisters Zarina, Dilia, Sabina, have organized themselves in a more modern way: dozens of rolls of fabrics of all colours are available, to choose the model, from the tie to the pillow to the refined dress, to be picked up ready in a day. Beyond the mosques, the owners of the Old Bukara restaurant also take cooking classes, but above all they serve a delicious plov on the terrace. Finally, do not miss the female Hammam, in a small alley behind the minaret: a fantastic intrigue of domed rooms and marbles run by old matrons.

Bukara is small and familiar, as Samarkand is vast and scattered. An ideal local guide to discover the most unexpected but also important aspects is Suzanna Fatyan who gives very useful advice on where to eat and what to see in different cities in the magazine Uzbekjourneys (uzbekjourneys.com). In Samarkand, the cultured and well-trained Suzanna recommends loads of delightful must-see: such as the Happy Bird Art Galery, where Elena Ladik offers Turkish coffee among antique objects, or, near the Shakhi Zindah necropolis, the Samarkand Carpet Workshop, where an entire Turkmen-Afghan family weaves, embroidery, teaches the art of carpets.

NOTE
Community Based Tourism, especially when women become role models, is good for several reasons. As explains JEANETTE SCHERPENZEEL, Senior Programme Manager at the Centre for the Promotion of Imports of the Netherlands: << It leads to more significant social and cultural insights. It also helps local communities become aware of the commercial and intellectual opportunities their culture has to offer to visitors. For example, in post-conflict Myanmar, community-based tourism plays a vital role for stability in the region. It encourages contact between the tens of different local tribes and tourists. Most importantly, the profits benefit the entire community,>>.
Iaia Pedemonte premiered to visit the CBT projects of European Community and European Center for Eco Agro tourism ECEAT: "Strenghtehing rural and community tourism Business Intermediary Organizations for Inclusive Economic Development in Centra Asia", started in Kyrgyzstan in 2000 and expanded in Kazakhstan and Uzbakistan until 2020